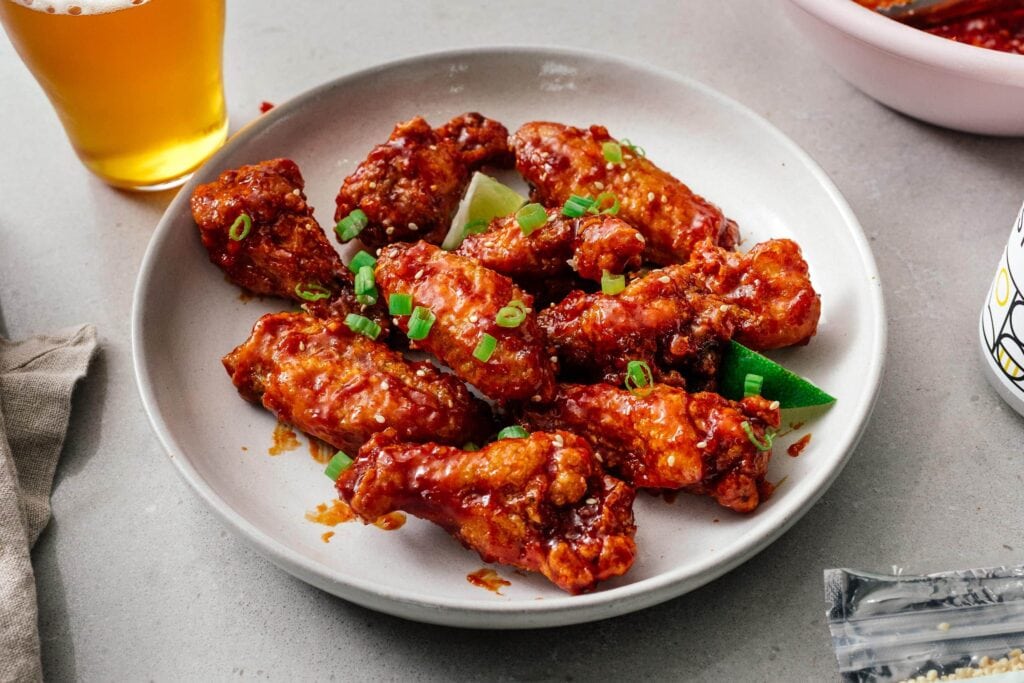 You’re 30 minutes away from the crispiest, crunchiest, tastiest chicken wings ever. Korean fried chicken, if you’ve never tried it, is an extra crunchy double fried chicken tossed in a sweet and spicy sauce. It’s like the best hot wings ever.

Our love of KFC*

Years and years ago in NYC, Steph and I discovered new-to-us Korean fried chicken and it was unlike anything we’d ever had before. Crispy, crunchy, spicy, sticky, and sweet; it was like a whole other level of chicken. We loved it so much we went on a quest to try every version in the city, from then-glossy chain BonChon to some strange third floor lounge in the fashion district overlooking a discount ticket seller where we were the only customers (spoiler, it was the best of 6-8 that we tried). 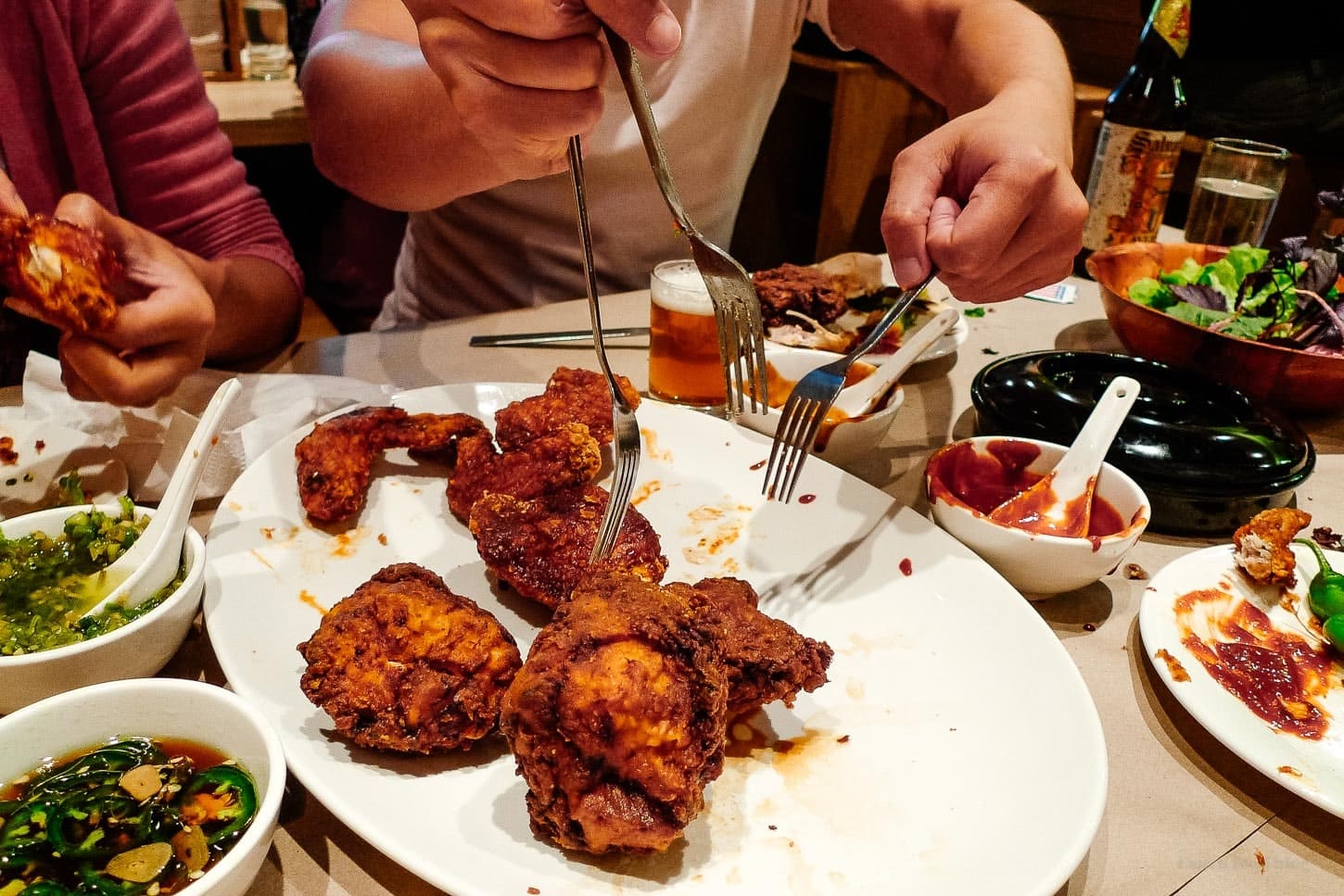 Korean fried chicken was so big in those days that David Chang did an east-v-west chicken feast; one whole Korean fried chicken vs one whole Old Bay southern buttermilk fried chicken, for an insane amount of money at the original Momofuku. You had to wake up at 8am on a certain day to get the reservation. We went to that too. (pictured above – for this post I asked everyone who was at that dinner what they remembered thinking and over a decade later, they all still shared the same verdict: David Chang should stick to southern buttermilk fried chicken, but the Asian sauces were really good).

These days KFC is everywhere, provided you live in a large city with decent Korean restaurants. It’s a classic Korean beer/late night snack food. But nothing really beats making it at home, fresh and hot. 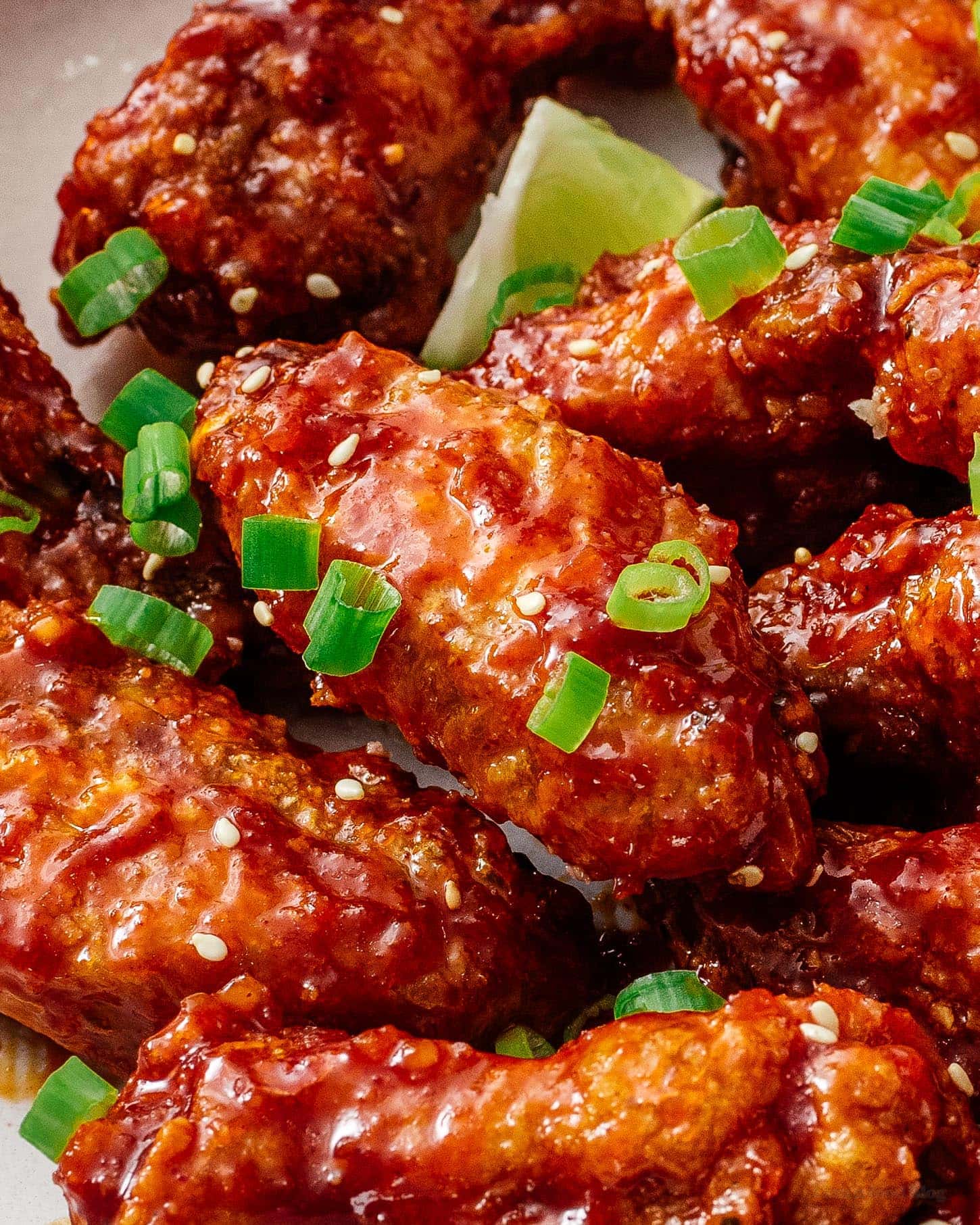 What is Korean fried chicken?

Korean fried chicken is classically double fried extra crispy wings and drummettes that are then coated in a sticky, sweet, and spicy sauce. It’s like buffalo wings amped up with the power of gochujang.

We’ve always loved the idea of making Korean fried chicken at home, but even with as much as we cook, deep frying is never fun, so we’ve never done it. Steph suggested using the air fryer, which I thought was a genius idea, and I developed this double air fry technique that produced a pretty darn crispy chicken that I think rivals the best of the best deep fried versions while being way healthier. 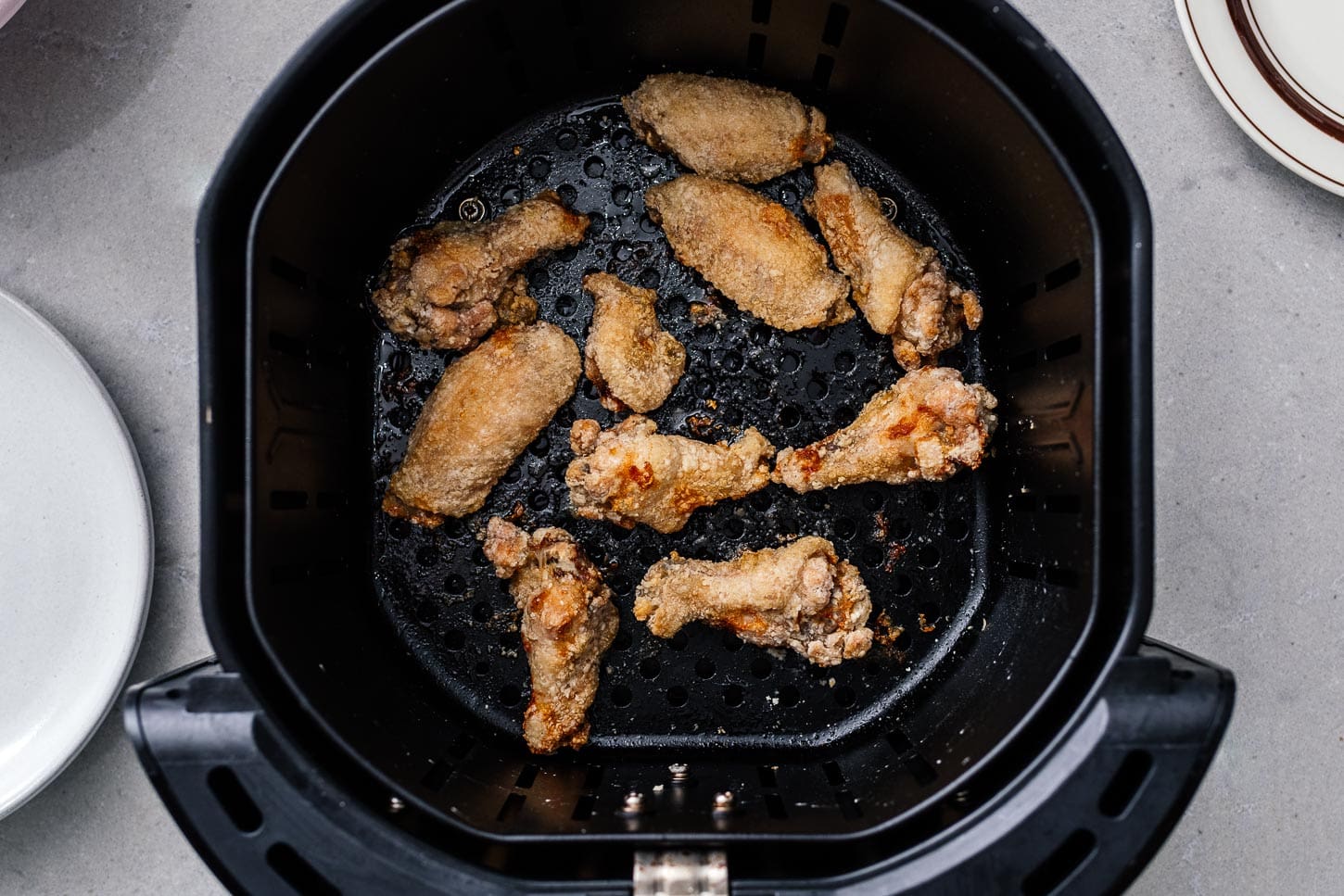 How to make Korean fried chicken 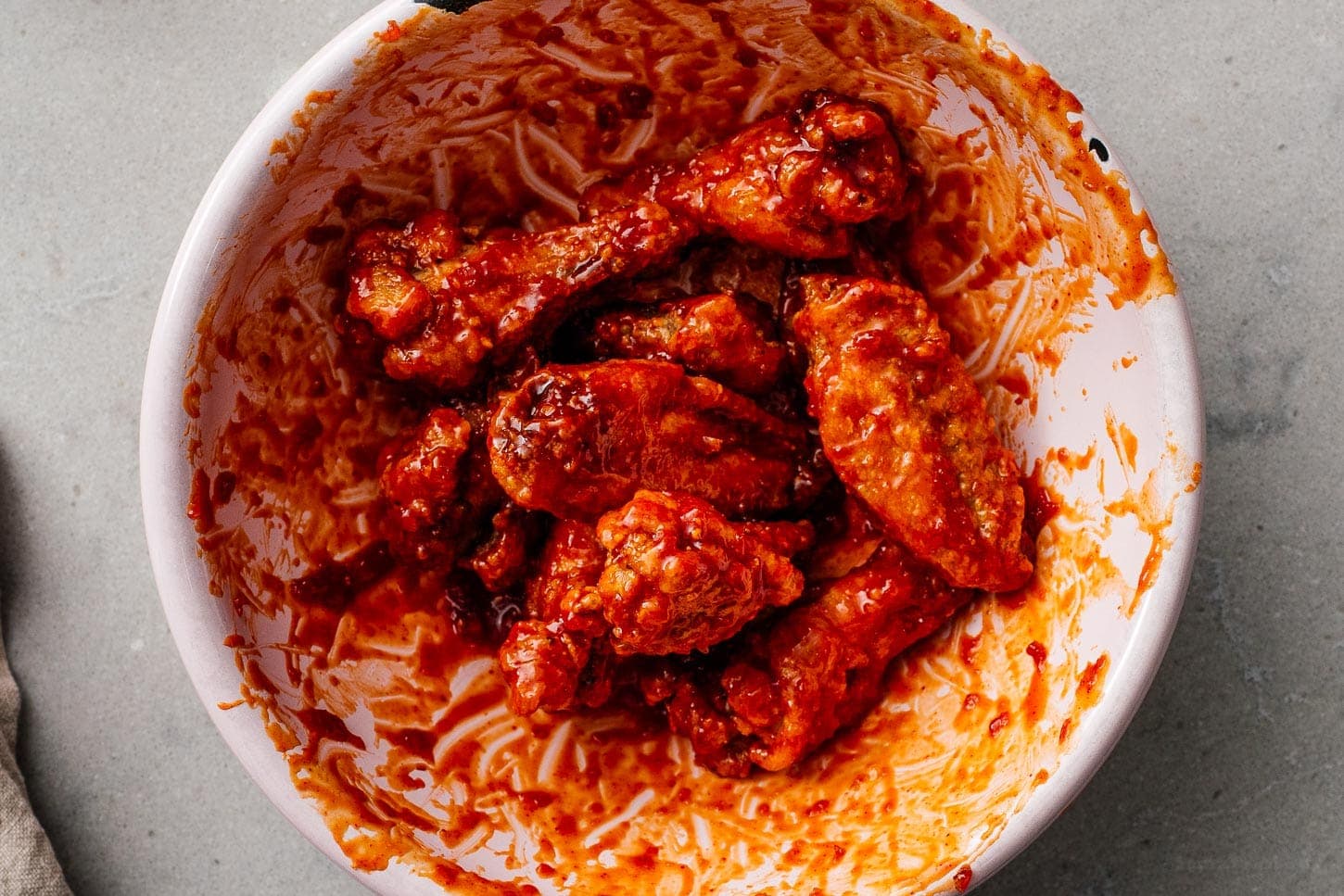 The magical sauce that goes on Korean fried chicken is a mixture of honey, brown sugar, gochujang, and ketchup. Really: ketchup is a very important ingredient if you want to keep things authentic. It’s important to note that this is just one possible sauce – there are other sauces for Korean fried chicken out there, but this one (in America, at least) is the iconic one. 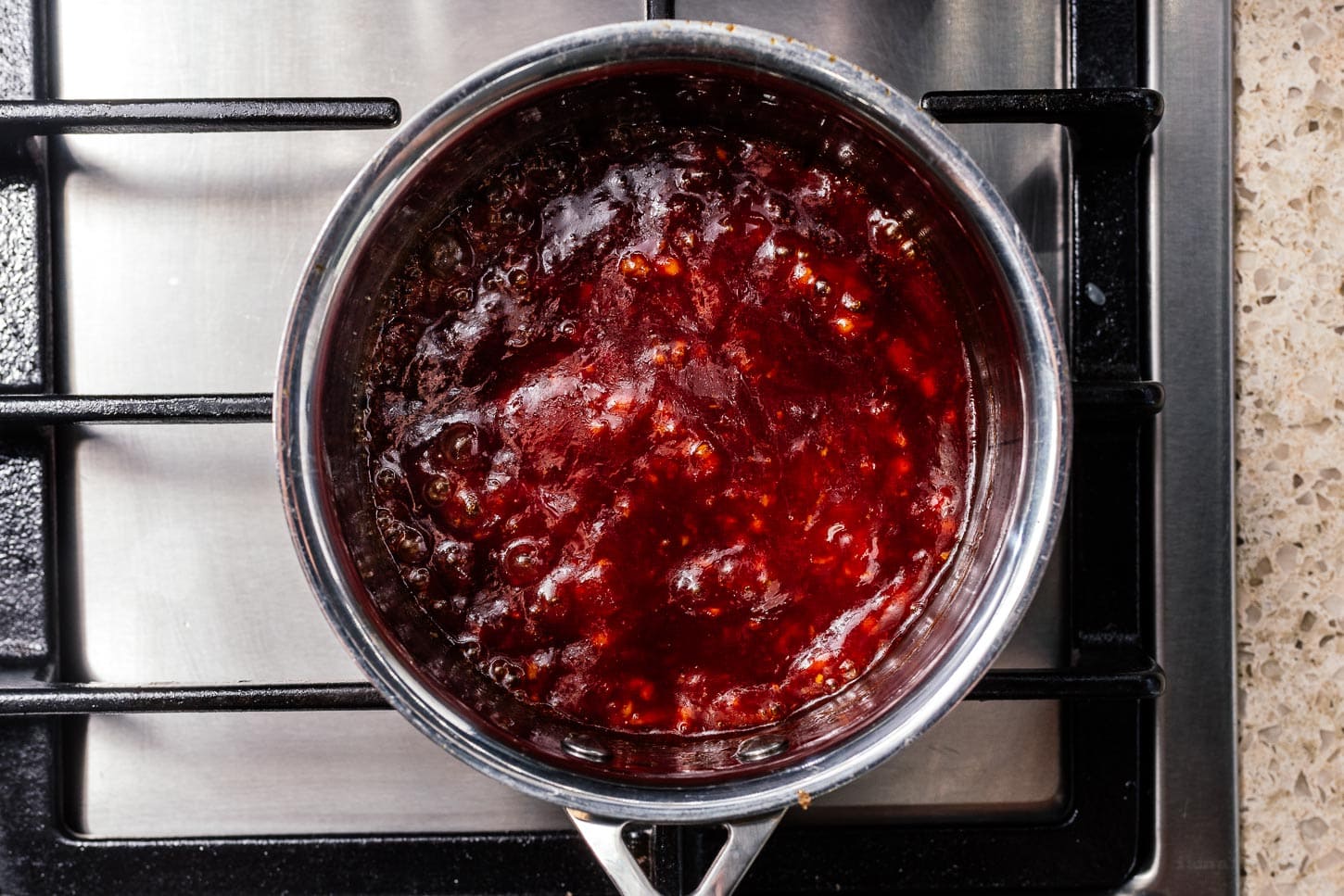 Gochujang is very slightly spicy fermented Korean paste that goes great in everything. We also use it for our sweet and spicy gochujang honey roast chicken and potatoes, our 10 minute spicy beef weeknight stir fry udon, and our kimchi stew with mochi egg recipe.. Traditionally it comes in tubs, but these days you can find it in much more convenient squeeze bottles in the Asian aisle of literally any grocery store. 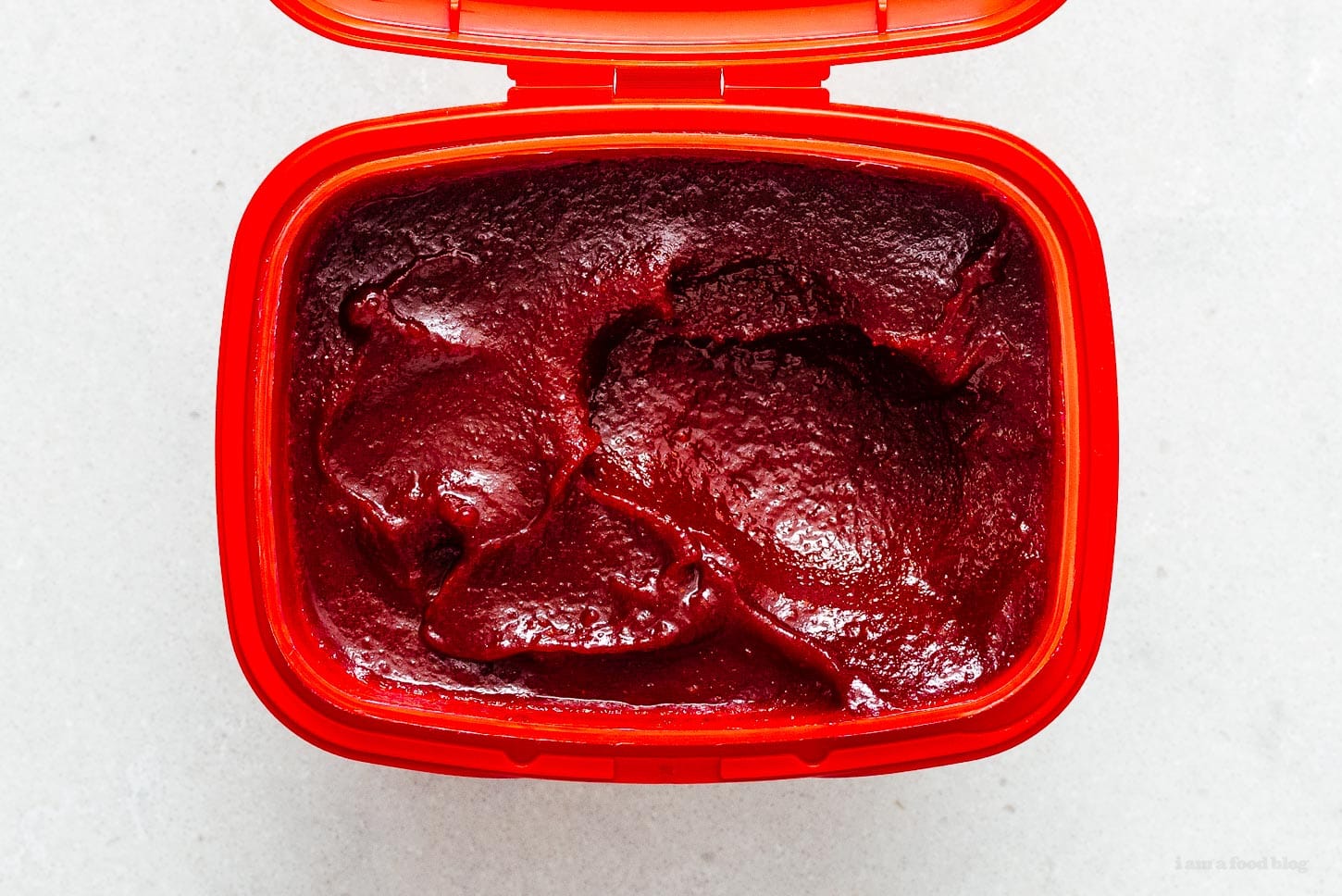 What if I don’t have spray oil?

Spray oil is really good, cheap, and irreplaceable in the kitchen – especially if you have an air fryer. It’s not worse for you than any other kind of oil, as long as you know when to use it and its limitations. We like a nice high smoke point propellant free oil, but you can use any oil you want (except olive because of its low smoke point) and you can even make your own. 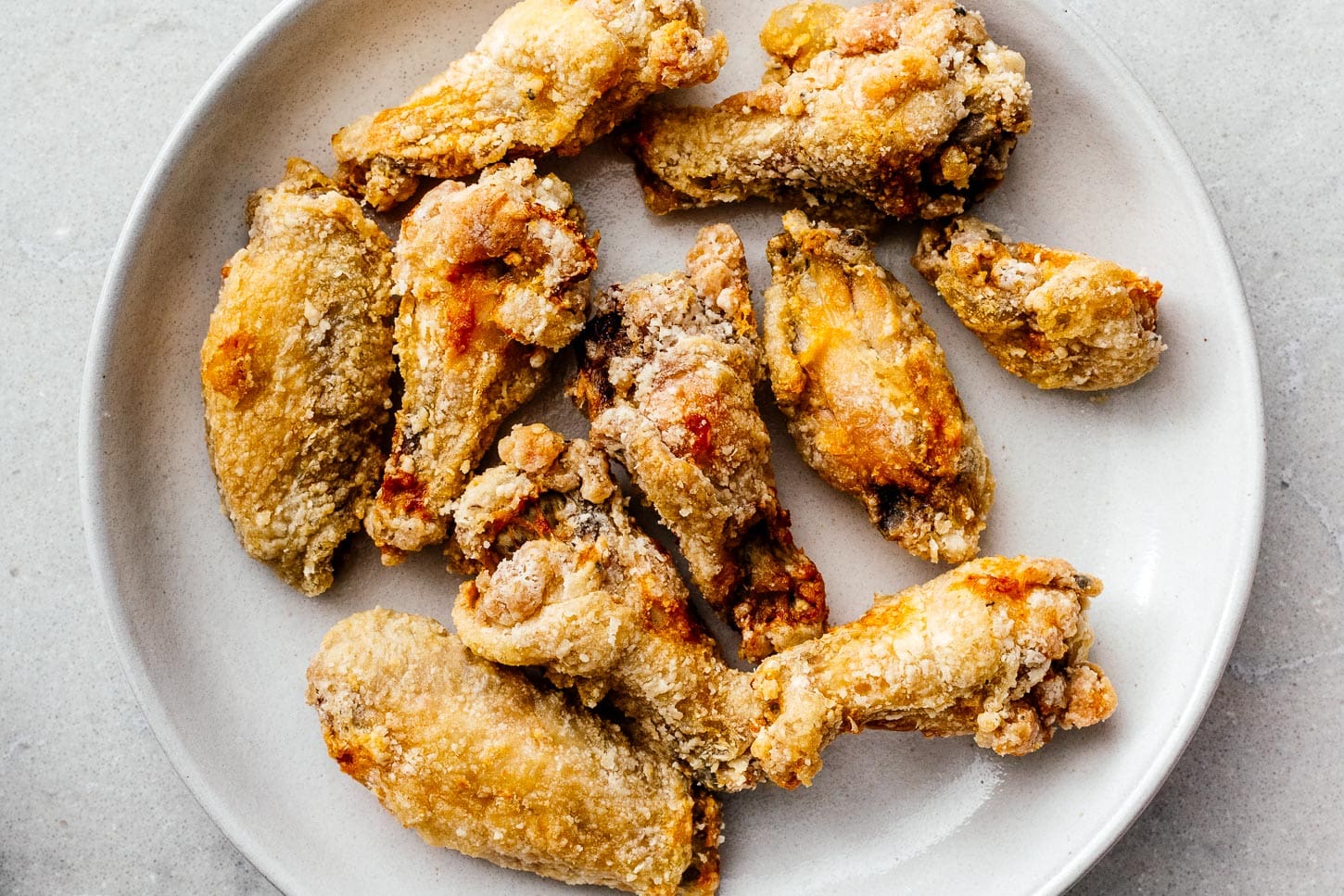 If you don’t have an air fryer (you should really consider getting one as they are great and cheap these days) you can easily do it the classic way: deep fry the chicken until golden brown, then remove and let cool a bit before dropping it back in for a few more minutes. Then toss in sauce, as usual.

Will this sauce work with any kind of fried chicken?

Yes! If you are feeling lazy, you can just make the sauce and toss it in grocery store or chain fried chicken. It won’t be as good or quite the same, but still pretty awesome. 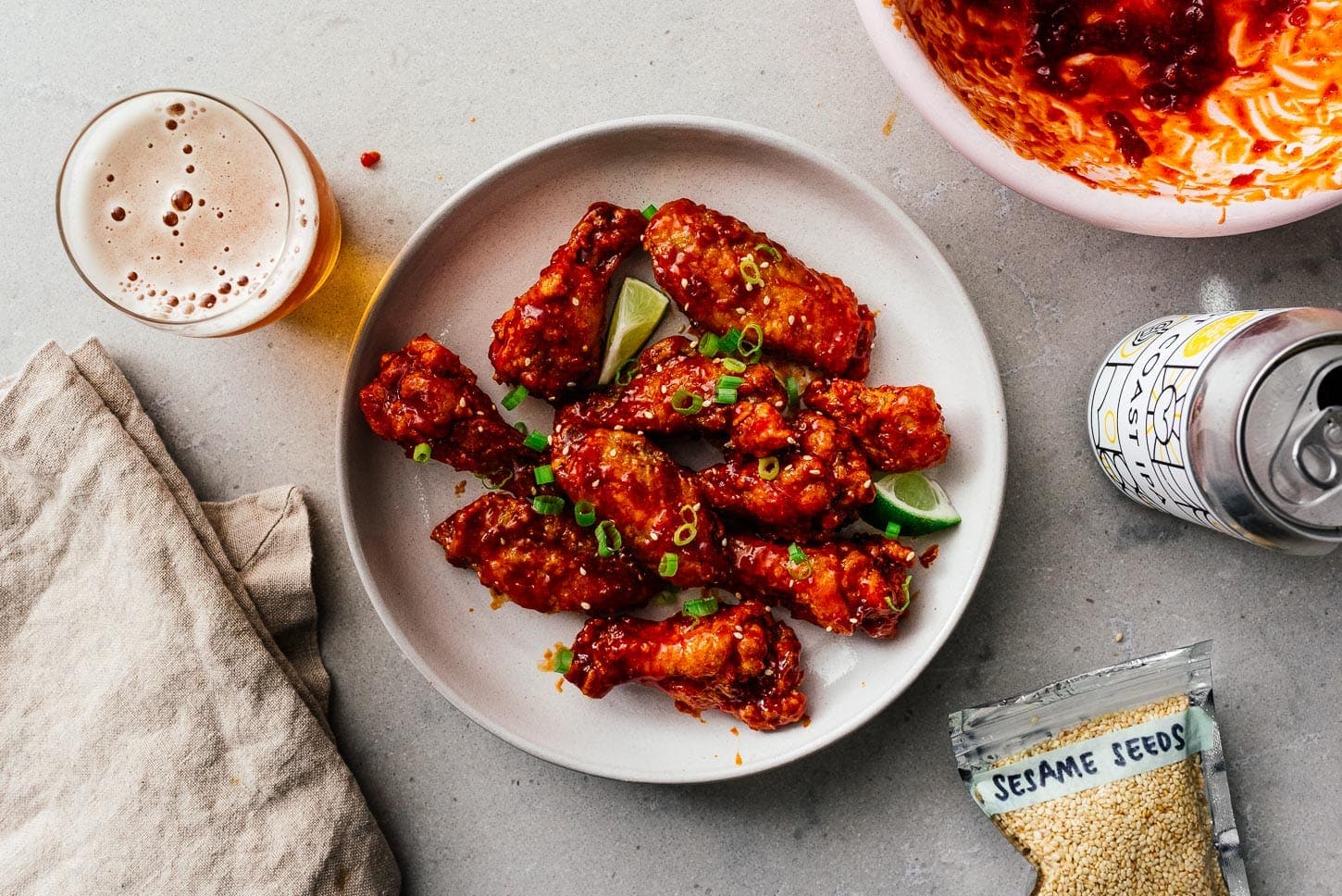 How does it compare to delivery

Korean fried chicken is available as a delivery item in most major cities these days. While this might seem like more work than just ordering delivery, right after I made this chicken, we went out and tried a local version – hot and fresh – to compare and contrast. The homemade KFC was both tastier and crispier. There’s no comparison at all; this recipe is way better, and way healthier too.

I hope you get some properly good KFC in your life asap. Hot and fresh.

Gochujang is available at all supermarkets in the Asian aisle or online via Amazon.